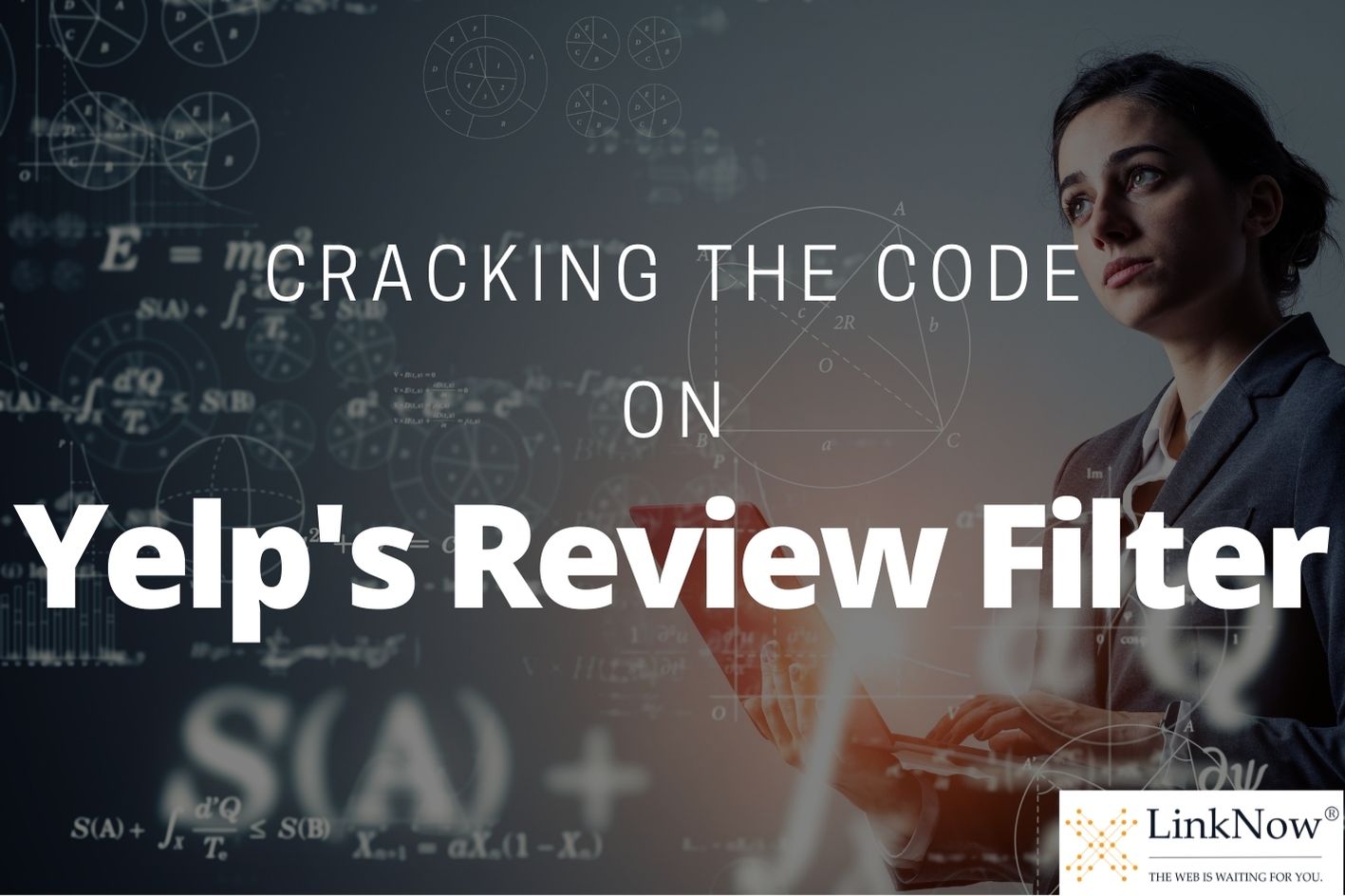 In our last post, we looked at everything you need to know about Yelp Reviews. This week, we’ll look in more depth at Yelp’s review filter and how it works.

Yelp is one of the most popular online review platforms, with almost 100 million unique visitors last year.

It’s also one of the most notorious.

Yelp uses a proprietary algorithm to identify, filter, and remove fake reviews. The Yelp review filter removes scores of reviews every day. In theory, it sounds admirable that they go to such lengths to combat fake reviews. But in practice, it proves complicated.

Let’s look at how the Yelp review filter works, why some love it, and why others detest it.

First: The Power of Reviews

First things first: Why are fake reviews such a problem to begin with?

The reason’s simple: Reviews are a powerful tool.

87% of consumers read online reviews before making a purchase.

The influence reviews have is enormous. They can compel shoppers to try a new brand, buy a new product, or look the other way. They inform customer decisions on a vast, global scale, leading some brands to soar and others to crash.

That power means review platforms like Yelp have some responsibility. It means they need to monitor their reviews and ensure they’re truthful and authentic, not fake. Otherwise, a slew of fake reviews could hurt the user experience—especially if those users get conned by a false word or two.

Fake reviews can put a brand like Yelp’s reputation at risk. But Yelp has a strategy to stop them.

To filter out fake reviews, Yelp uses a proprietary algorithm it calls its “recommendation software.”

Yelp’s recommendation software filters reviews based on several factors, including:

After reviewing that information, Yelp will make a decision either to recommend the review or not recommend it.

Recommended reviews automatically appear on a business’s Yelp page. They also count toward the business’s rating on Yelp.

Unrecommended reviews are not immediately visible. They’re hidden from most users’ sight, and they do not factor into the business’s Yelp score.

How Does the Yelp Review Filter Work?

Yelp’s review filter considers several factors to identify and hide potentially fake reviews. It’s overzealous by design, removing anything with even a hint of phoniness.

Yelp doesn’t release many details about its recommendation software because they don’t want people trying to cheat it. Still, we know the software considers several factors when evaluating reviews. Three of the most important are:

The Yelp review filter is constantly evolving. The reviews it recommends (and doesn’t recommend) may change from day to day because it’s always evaluating new signals. As such, you may notice reviews “disappear” then “reappear” from time to time. According to Yelp, it’s not a flaw. It’s a feature.

Why Does Yelp Filter Reviews?

Yelp filters reviews to combat malicious reviewing and give the consumer a more genuine understanding of a business’s reputation.

Yelp and its competitors know how critical authentic reviews are to the overall reliability of their site, and it’s in their best interest to ensure they’re as genuine as possible.

If you’ve read up to here, you might have already noticed some problems with Yelp’s review filter:

Yelp says its review filter is supposed to capture the word-of-mouth reputation of a business. But there’s a problem with this:

Some industries feel the Yelp review filter’s effects far more than others.

Meanwhile, others are not nearly as affected.

Take the service industry, for example. Restaurants are one of the most regularly reviewed businesses on Yelp. They tend to acquire many reviews from dedicated Yelp users.

Those Yelp users might visit dozens of restaurants, leaving a detailed review for each of them. And because the Yelp review filter prioritizes reviews from regular Yelp users, those reviews will all look authentic and stay unfiltered.

But other industries can’t count on their customers to be regular Yelp users.

Consider the general contractor. A contractor might take on 1-2 jobs a month. Already, they’re at a disadvantage because they have far fewer customers.

Worse yet, the contractor’s clients are far less likely to be regular Yelp users. They might only write a review on Yelp as an afterthought. They might even have to create a Yelp account because they’ve never used the platform before. And because those reviews are coming from new accounts, they’re far more likely to be filtered out.

Plus, that contractor can’t ask clients to write a review: That’d be against Yelp’s policy. So, if you’re a service provider that targets a certain demographic—such as the older, not-so-tech-savvy crowd—you’re left in a bit of a catch-22: Your clients might not think to leave you a Yelp review, yet you can’t remind them, either. And even if the occasional one remembers to write a review, it’s at a much greater risk of being removed anyway.

We Still Have Much to Learn

Deterring fraudsters and making review pages more reliable is a worthy pursuit in the internet age. While we still have a lot to learn about navigating downfalls and ironing out discrepancies, using algorithms and communication analytics to monitor reviews is a step in the right direction.

Have you had a run-in with the Yelp review filter? Got a tip for how to overcome it? Leave a comment below! And if you need help managing your business’s online reputation, don’t hesitate to reach out to LinkNow at 888-667-71864 or by emailing website@linknowmedia.com.

That’s why getting reviews is so crucial. Because customers place so much value on reviews, creating a space where clients can share their experiences should be a top priority.

With that in mind, here are 3 tips to get more Google reviews.

If you’re looking to get more reviews, you want those reviews to be good. So, to get good reviews you need to be providing excellent services.

While providing great services may seem like a no-brainer, there is a bit of strategy to it.

Here are a few tricks to deliver a stellar client experience:

Some clients won’t leave you a review because they don’t know how or simply don’t think of it. To counter this, make it super easy. At the very least, add a link to your Google review page on your website. We also recommend adding the link to the end of an email, on your social media, or on a physical business card.

If you cater to an older demographic, providing step-by-step instructions or screenshots of the process can also be helpful and increase the likelihood of participation.

3.     Ask Your Clients to Leave Reviews

Don’t be afraid to ask your clients to leave reviews, in person, on the phone, or in a follow-up email.

You may be surprised to know that 86% of consumers are willing to write a review, and directly asking them significantly improves your chances of receiving one.

Let your clients know how valuable their input is and how sharing their experience could help customers just like them.

Respond to Your Google Reviews, Good AND Bad

Respond to all Google reviews, both good and bad.

At its essence, the Google review page is a conversation between you and your clients. Not only does it allow customers to share their experiences, but it gives you the space to respond.

It’s easy to respond to good reviews. A quick “thank you!” goes a long way. But bad reviews give you a chance to show off your professionalism and flex your conflict-resolution skills—an invaluable skill for any business owner.

Respond professionally and promptly with helpful solutions that invite them to contact you again. By doing so, you’ll impress visitors who see how much you care about all customers, satisfied or otherwise.

Get People Talking About Your Business!

The bottom line is this:

The more reviews you have, the better.

Providing great services is the first step to getting good reviews. But don’t forget to follow through.  Ask your clients to review your business.

Send them a link.

Add a Google Review badge onto the home page of your website.

The best way to get reviews, is to ask for reviews. So ask away.

Found this post useful? Want more guidance? Let us know what you think by leaving a comment below.

If you need help setting up your Google My Business or getting more Google reviews, contact us at website@linknowmedia.com to see what we can do for you.